Director Ric Burns’s first film, CONEY ISLAND, an hour-long study of the amusement empire, premiered at the Sundance Film Festival and was broadcast nationally on PBS in February 1991.  The film explores the beginnings of America’s first amusement park, before the dawn of the Disney era.  By the turn of the century, Coney Island was internationally famous– attracting millions to it three pleasure domes: Steeplechase, Luna Park and Dreamland.  CONEY ISLAND   unearths a very compelling and often haunting history of the nation’s first permanent amusement park.  Time magazine named the film one of the top ten television programs of 1991, and the Chicago Tribune called it “one of the best documentaries you will ever see.” 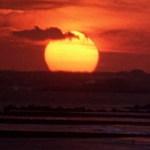